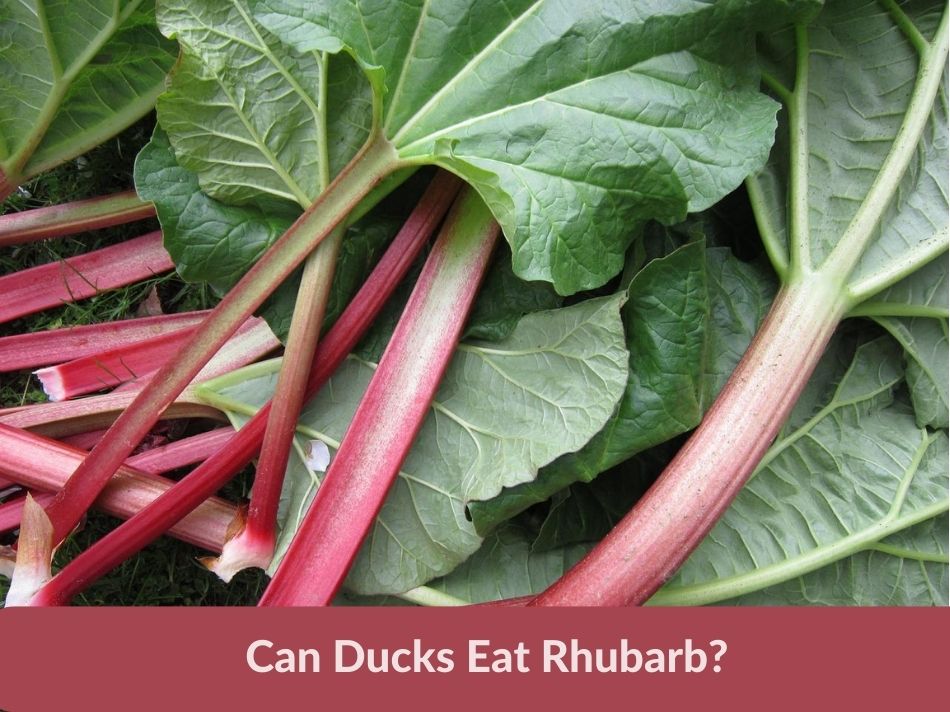 A wild duck’s diet consists mostly of plants and insects. They will eat a wide variety of aquatic vegetation, including pondweed, water lilies, and algae. Insects make up a large part of their diet as well, including beetles, dragonflies, and water bugs. Domestic ducks usually eat commercially prepared duck feed, vegetables, fruits, and water. But, can ducks eat rhubarb?

No, ducks should not eat rhubarb because it contains a toxin called oxalic acid. It can prevent the duck from absorbing calcium, which can result in egg binding.

Planning the garden around the ducks living quarters is important and having plants toxic to ducks can be risky, if unlucky could lead to health complication for your ducks. Rhubarb is a common plant and it’s important for all ducks owners to know that it is toxic and that ducks needs to kept away from it. In this article we will deep dive into ducks eating rhubarb.

Rhubarb is a member of the genus Rheum and it’s grown for its edible stems. When cooked, rhubarb has a sour taste that is often balanced with sugar and it’s often used in pies and other desserts.

Though it is often mistaken for a fruit, rhubarb is actually a vegetable that is related to the celery family. Rhubarb grows best in cold climates and is typically harvested in late spring. Rhubarb stalks are thick and celery-like, and are usually red or green in color.

Is Rhubarb Toxic To Ducks?

Yes, rhubarb contains a toxic called oxalic acid, which can cause complications for the ducks calcium absorption. Most of the toxin i located in leaves, but the stem also contains lower amounts of oxalic acid and ducks eating any part of rhubarb should be avoided.

There are many other vegetables and plants that ducks can eat and to avoid the ducks from being poisoned, it’s a good idea to remove rhubarb plants near their living area or enclosures where they can reach rhubarb plants.

If you see ducks eating rhubarb, it could be good to contact a veterinarian.

Rhubarb overall is nutritious, but ducks still can’t eat it. Below are the nutrients for 3.5 ounce of cooked rhubarb.

It also contains the following minerals and vitamins:

It seems like most ducks tends to stay away from rhubarb plants, but there is no way of knowing if ducks still will nibble on it if they are hungry enough. The best way is to remove the risk of them eating rhubarb.

Some Plants & Veggies Safe For Ducks To Eat

Below are some that are healthy and safe for ducks to eat.

If you are a new duck owner or are introducing some new treats, then it’s a good idea to always do research before feeding them, to make sure it’s safe.

Eating rhubarb is not good for ducks because of the toxin oxalic acid. It can effect the ducks calcium absorption, making it a health issue for them if consumed.

Most of the time, they won’t touch the rhubarb, but they are still animals and if hungry, instincts can kick in, leading them to nibbling even on rhubarb leaves.

The safest option is to not have rhubarb around near their living quarter or areas where they normally walk to during the days.

Always contact a veterinarian if you suspect that your ducks have been eating rhubarb.

Thanks for reading, take care!

link to Can Ducks Eat Grapefruit? (All You Need To Know)

A duck's diet is mostly made up of plants and animals that live in water. This can include things like algae, aquatic insects, and small fish. Domestic ducks normally eats a commercial duck diet in...

Continue Reading
link to Can Ducks Eat Lavender? (All You Need To Know)

Ducks are omnivorous, meaning they eat both plants and animals. Their diet consists of aquatic plants, insects and small fish. Ducks also eat some grain, but not as much as chickens. Domestic ducks...

Hi and welcome to GrowGreenGardens.com!
My name is Mikael and my big passion is spending time in the garden growing anything from flowers to vegetables.
I created this blog to share my experience and hopefully it will give you some great gardening tips.